Last week Earther.com published another article of mine on the Cape Town water situation. This time I focused on the city’s plan to tap the region’s aquifers. Here I’d like to add to and expand upon a couple of points I make in that article:

Not all aquifers are created equal
The Western Cape’s TMG Aquifer is a generally deep and slower recharge aquifer charged from precipitation caught primarily in the area’s mountain regions. These mountains therefore serve both as a sort of net for catching moister brought in from the ocean and as aquifer recharge areas.

In contrast, the low-lying coastal areas around Cape Town contain shallower aquifers that generally recharge more quickly. These areas were historically covered in sand dune formations over the soft Malmesbury shale layer. Nebo, the scientist from CSIR who I reference in the article, estimates that water travels at a pace of around one to two hundred meters per year in the Atlantis Aquifer recharge area. While these aquifers are very complex and variable, it seems reasonable to estimate the same rate in the Cape Flats Aquifer. (Please note that I don’t profess to be a hydrologist, geologist, or any other sort of professional scientist. This is from the literature I’ve read, which I encourage you to read as well if you are interested.)

Incredible biodiversity, unknown impacts
Just to add some numbers, the Cape floristic region, which includes Cape Town and much of the rest of the Western Cape, has the highest concentration of diverse plant species in the world, with seventy percent of an estimated 9500 plant species found only there. That’s why in 2004, in order to protect this unique diversity, some of the remaining natural areas within the Western Cape were designated a Unesco World Heritage site.

The impact of aquifer extraction on this biodiversity is not well understood. Speaking to a local news outlet, University of Cape Town Associate Professor Edmund February cautioned: “I really worry about just tapping into [the aquifer] and drawing down on [it] without actually understanding what the ecological reserve is necessary to maintain those unique species that are sitting on those wetlands.” His university colleague Adam West, agreed, also noting that drilling construction and operation could also have unknown impacts on affected areas. Last month, West and several other scientists submitted a letter to local Western Cape governments voicing these concerns. Jasper Slingsby has a great quote in his GroundUp article from February. “In short,” Slingsby writes, “this is taking the very same water that replenishes our water supply system, feeds groundwater, supports biodiversity in the catchments and supplies the rivers that feed towns and farm dams.” Slingsby argues City’s plan to drill for water in these areas is effectively “cancelling the insurance policy we need since rainfall is predicted to become ever less certain.” 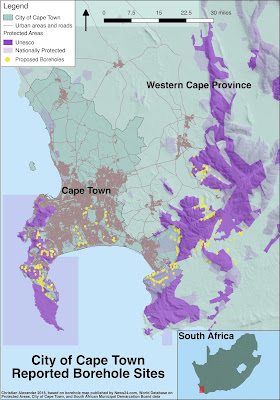 Atlantis could show Cape Town the way
Atlantis’ managed aquifer recharge program, which was born out of a need to serve the water needs of a remote apartheid-era settlement, has provided the City of Cape Town with an ideal template for recycling Cape Town’s water on a larger scale. An isolated near-coastal community with a population of around seventy thousand, Atlantis has benefited from one of the oldest MAR systems on the continent. For over 40 years, Atlantis residents have largely depended on effluent and stormwater that is treated, filtered, and recycled through its shallow aquifer to supply it with potable water.

The regional drought has brought renewed interest in Atlantis’s system as a model for larger-scale extraction for the greater metropolitan area. While lack of investment over the years meant that the Atlantis system’s efficiency had been on the decline, the current drought has provided the City with the impetus to restore its capacity. “The drought actually woke us up,” Atlantis’s wastewater treatment plant manager John Charles notes. Currently one hundred percent of Atlantis’s water needs, around 15 megalitres per day, are being met through its MAR system.

Like many others, I’m concerned about the idea of putting wastewater down into the aquifers. However, in the Cape Flats I’ve come to believe it is not just workable but probably necessary. Given the level of pollution that is already occurring in the Cape Flats aquifer, shifting towards use of this water will work to focus attention on stopping this pollution. The amount of water Cape Town discharges into the ocean is incredible, and should be reused. The Cape Flats aquifer is the only place where we are going to be able to recycle this water on the level that we need. It’s also a much better option than desalination or tapping the TMG aquifer. Granted, the best option by far is to become much more efficient with the water that we use, and better management of the riverine system. A sustainable MAR in the Cape Flats area would be a perfect complement to these actions.

Posted by clalexander at 7:56 AM No comments: