A few weeks ago I was inspired to draw up some spatial designs related to my work with the PHA Food and Farming Campaign (see my previous post for background on the Campaign). This occurred while listening to a landless farmer at a Campaign meeting as she related that people in her community wanted to know for who or what we were protecting the Philippi Horticultural Area. Her concern about potential confusion over ultimate goals of the Campaign prompted me to want to depict one of the Campaign’s primary proposals, which is providing smallholding farms to black landless farmers in the area.

As a basis for investigation I took a roughly 75 hectare area in the southwest corner of the PHA (previously approved for suburban development) and drew what the farms/homes/erfs might look like from several different scales and perspectives, using the existing physical context, the Campaign’s proposal criteria, and a few guiding spatial principles (derived from permaculture and urban/rural development design sources). 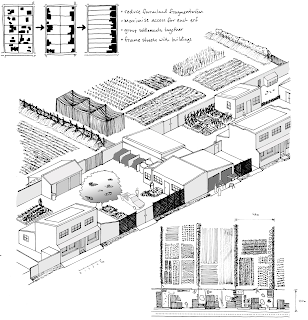 This sort of exercise is a really useful process to evaluate certain spatial design proposals and to convey a vision. There are a lot of assumptions built in here that others in the Campaign will have to evaluate and critique, but to me it seems important to be able to start articulating some of the discussed counter-proposals to suburban sprawl, both to test the ideas and to (hopefully!) provide inspiration. Obviously there is a long way to go, but you have to start somewhere!

Posted by clalexander at 8:11 AM No comments: