Metrorail up in flames 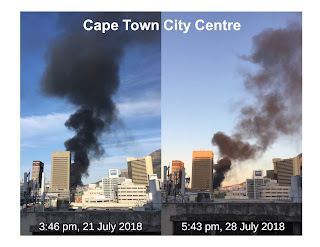 Cape Town’s rail public transport is literally going up in flames. For the second Saturday in a row, in the historic heart of Cape Town, billowing clouds of tar-black smoke have marred the otherwise clear blue winter sky. The source: arson attacks on passenger trains at Cape Town Station. This latest fire marks the sixth act of arson on Cape Town’s Metrorail system in the six weeks, and the third event in the past week.

The impact of the fire damage has been tremendous. Dozens of railcars, tens of millions of Rands of damage, and a 30%+ reduction in passengers over the past year, which will create even more issues for the struggling parastatal agency. Metrorail’s failure will also have a huge impact on the City’s long-term plans to address important issues of congestion, climate change, and economic activity. Earlier this year, the City came out with a Municipal Spatial Planning Framework whose long-term vision was premised on a functional rail system. While some questioned why the City would plan around a rail system that has long operated inadequately, I agree with the City that any long-term vision must be built around the rail system. It is an asset too valuable to discard, particularly in light of the imperative to move towards public transport and away from private automobiles.

There are a number of theories regarding who is behind the attacks. One, promoted by the civic organization #UniteBehind, is that elements within Metrorail itself are trying to destabilize the organization in order to enable continued corruption within the organization. Another is that the minibus taxi organizations, many of whom at times have used mafia-like strongarm tactics to maintain their economic power, are seeking a competitive advantage. It is hard for me to not look towards the minibus taxi organizations, which are well-placed to benefit from a hamstrung rail network, the only effective alternative for many people commuting from the township areas to the economic centers of Cape Town.

Arson isn’t Metrorail’s only problem, with vandalism and theft also having a big impact on operations. However, the acts of arson, I would argue, are in a different category. While there may be an economic motivation for them, and a desire to sabotage Metrorail, these acts seem more akin to terrorism. The symbolism of huge black smoke clouds emanating from Cape Town Station, for the City’s political and economic elite to see, seems intended to elicit a sense of fear, a threat, an assertion of power and control.

In addition to horror, I watched these clouds from my balcony this Saturday with a great sense of sadness. The people who are hurt most by this are marginalized, hardworking people who can least afford it. Whatever shortsighted goals this machiavellian act will achieve, it will almost surely also deepen the entrenched economically and racially based transportation segregation in Cape Town, which in turn will make it even harder to move towards an environmentally, socially, and economically sustainable future. One can only hope this may instead serve as the nadir for rail in Cape Town, and galvanize reform and support for this much-needed service.

Posted by clalexander at 1:51 PM No comments:

The skies have opened over Cape Town and the rest of the Western Cape during the past few weeks, providing much needed relief from the ongoing severe drought the region has faced over the last several years. Lush green fields and forests and streaming waterfalls off of Table Mountain signal a return to rainfall patterns that are more normal for this time of year. This month’s rains have catapulted dam levels to over 42% capacity, higher than this time last year and 2016, although still far below recent historical levels.

The auspicious weather has resulted in the hopeful, if guarded, pronouncement by the City of Cape Town’s Deputy Mayor Ian Neilson that ‘Day Zero’ will likely be avoided in both 2018 and 2019. This is assuming, however, that the rains continue and that existing water restriction levels are maintained.

The City’s current water restrictions are, by many standards, exceptional within a modern developed context. For residential households, whose usage constitutes up to 70 percent of the City’s overall usage, these restrictions mean limiting daily consumption to 50 litres of water per person per day. While the City’s population has yet to achieve this goal, it has consistently come close over the past calendar year, halving domestic water consumption compared to before the drought. For the sake of comparison, in the wake of California’s own historic drought a few years ago, Californians’ daily consumption in 2017 averaged between 272-363 litres, roughly five times that of Capetonians.

Notwithstanding the recovering dam levels and Capetonians’ heroic conservation measures, short-term projections and long-term scientific forecasts indicate that returning to previous water consumption levels would likely imperil Cape Town’s water security. Even under current consumption levels, improbably high sustained rainfall would be needed over the next year in order to erase the impact of the recent drought. Capetonian poet and water writer Helen Moffett writes that expecting this amount of rain would be “like rolling the dice, coming up with six, and assuming that the next eleven times it rolls, it's going to come up six again.” Yet some observers expect only an averagely wet winter, meaning the odds look even worse for gambling that this will be an exceptional year. More likely, it will take years of “average” rainfall to return to normal dam levels. In the longer term, the climatologists forecast a 2-17 percent reduction in annual run-off by 2050, meaning that the Western Cape could see a reduction in daily yield of 160 million litres, the equivalent to roughly one quarter to one third of daily output today.

With these predictions of the future, and with the experience and knowledge that the past six months of drought restrictions have brought, why not take the bold move to establish the current restrictions as the new normal? The restrictions, along with an impressive citywide advertising campaign, have helped bring about behavioural changes in the way individuals and households manage water, changes that could be reinforced by making the current expectations permanent.

The City and Provincial governments may risk losing these water conservation gains based on near-term policy decisions. A return to more lenient water restriction levels will undoubtedly lower expectations about conservation and lead to increased consumption. On the other hand, continuing to justify the current restrictions as part of an emergency response to the unprecedented drought may fatigue citizens as they tire of maintaining a perpetual sense of urgency about water resources. Now is the time for the government to pivot from framing the current restrictions as extraordinary to establishing them as the expected baseline. Re-writing the water regulations to require current conservation efforts as the new normal will help to do this.

Obviously some of the current 6b restrictions would have to be adjusted in order to allow for responsible activities once the immediate severity of the drought has been overcome. The City has already shown its ability to adapt its regulatory approach in response to lessons learned during this drought. In addition, adoption of regulations is not sufficient; enforcement, publicity and investment must follow, while the government must also prioritize improving water access to those communities who lack it. However, now is the time to take the momentum that has propelled the City to the forefront of water conservation stewardship and leverage it to establish a new standard for water responsibility.

Posted by clalexander at 3:05 PM No comments: