I suggested in my last post that I had been thinking a fair amount about the water crisis in Cape Town. Here is a link to the article I wrote about it for Earther.com that was published yesterday (thanks to my friend Ari for inviting me to write on the subject).

It will be interesting to dig more into this crisis both here and hopefully in at least one or two more articles. The situation is so fluid--the City has already moved the date for "Day Zero" up again. There is still a lot to digest. One element that I think is particularly interesting is the personal process of adapting to limits to water. One of the big issues I see is the City's plan to go from 100% to zero, i.e. from free-flowing taps to taps turned off. Surely it would make more sense to have a progression, such as rolling black- or brown-outs, as Cape Town had a few years back during its energy crisis. This all or nothing approach has the potential to really catch a lot of people off guard. I imagine the City was just hoping we would get through without any sort of mandated limitations, but that strategy is looking pretty bad now.

Posted by clalexander at 7:48 PM No comments:

While this blog hasn’t reflected it yet, I’ve been thinking a lot lately about the drought and water crisis in Cape Town. Actually, lots of people have. The City’s predictions for the date for “Day Zero”, which is expected to come right around Earth Day, are frighteningly close. Even scarier are the City’s plans for what happens afterwards: taps turned off, water rations provided at centralized locations, police and national defense forces brought in to secure water stations and the city more generally. WWF South Africa is launching a new weekly pamphlet discussing details about conservation. It mentions some of the practicalities, such as dry toilet strategies and assisting the elderly with carrying water rations. This could go on for months, until there is enough water in the dams, or until the city’s desalination and borehole projects are completed. Honestly, it sounds like the setting for a Hollywood dystopian movie.

The cynic deep in me fears that a Day Zero type situation is the only thing that will lead to a radical readjustment in our urban water use. As long as the taps continue to run, and water appears to be a limitless and effortless resource, many people will act accordingly. Even people who are very water conscious can’t help but use water needlessly by virtue of being integrated into the larger water system. Our whole system, from the water and wastewater infrastructure, to urban design and architecture, to the toilets, showers, and sinks installed in our homes, were all built based on the premise that water would always be abundant. Changing that will take more than a few (or even lots) of individuals acting alone; it takes a societal shift in thinking about water resources.

And sadly, a deeper cynic in me doesn’t believe that even a Day Zero will change the ability of the wealthiest among us to avoid the consequences of this crisis and maintain wasteful habits. Those who can afford their own boreholes, who can afford to take a vacation somewhere else, or to skip visiting their summer home in Cape Town, won’t feel the impact in the same way that most Capetonians will. I anticipate that the gap in wealth in this country, which colors so much else, will also deeply affect how this crisis plays out.

Posted by clalexander at 11:48 PM No comments:

Bill Mollison’s Permaculture: A Designer’s Manual (1988, 2012) is often described as the “bible” for permanent agriculture, or “permaculture”, theory. Perhaps unsurprisingly, Mollison co-formulated the practice of permaculture, which he describes as “the conscious design and maintenance of agriculturally productive ecosystems which have the diversity, stability, and resilience of natural ecosystems” (2012:ix). There is an incredible amount of information in this book, too much for me to cover in one go. Instead, here I’ll briefly attempt to adapt Mollison’s theory of patterning (Chapter 2) for the purposes of crafting a set of principles to guide regional planning. I am motivated to do so because of the apparent (to me) suitability of natural patterning theory to planning. I’m not aware of any other explicit attempt to apply Mollison’s pattern principles to planning, although I would not be surprised if someone else has already done so.

To start, I will briefly note the ethical bases underpinning permaculture:

I won’t dwell on these, although I will note that the third ethical bases is obviously the most controversial. Mollison states that this principle is in actuality a product of the first two principles.

Likewise, I won’t reflect on these here. Rather I want to make sure to properly ground Mollison’s discussion of patterns.

According to Mollison, patterns are an essential element in designing human habitats within Nature, and thus permaculture: “[p]atterning is the way we frame our design, the template into which we fit the information, entities, and objects assembled from observation, map overlays, the analytic divination of connections, and the selection of specific materials and technologies. . . . The pattern is design, and design is the subject of permaculture.” (2012:70, 94). Consequently, Mollison puts great emphasis on our ability to learn from and use patterns: “If we are to reach an understanding of the basic, underlying patterns of natural phenomena, we will have evolved a powerful tool for design, and found a linking science applicable to many disciplines” (2012:70). 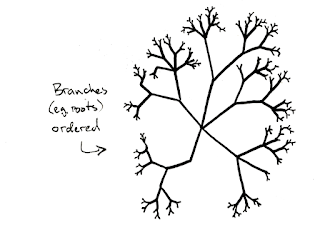 Mollison starts his discussion of patterns by reviewing a broad set of shapes that are found in nature. These include waves, streamlines, cloud forms, spirals, lobes, branches, scatters, nets, fractals, to name some of the most common ones. Mollison notes that, in contrast to modernist Euclidean shapes, nature is “imperfectly round, never flat or square, linear only for infinitesimal distances, and stubbornly abnormal” (2012:71). Importantly, the patterns found in nature, and in Mollison’s own model, have the ability to both “tile” next to (tessellate) and nest within (annidate) each other to form natural matrices or mosaics. Tessellation and annidation serve as natural strategies that promote complexity (connections) and efficiency (2012:72-74; see also 30-31 for discussion of complexity). 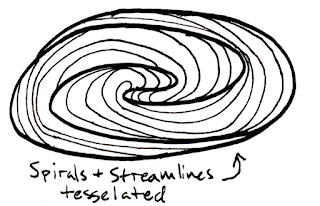 Patterns result from shapes that are created and change through action of physical materials and organisms over time (Mollison formulates it slightly differently while discussing the concept of pulsation: “Pulsers plus patterns account for shapes” (2012:82)). The force of change over time has profound implications on patterns, as is demonstrated by what Mollison describes as “edge harmonics” and “boundary conditions”, which occur on the edges of a particular substance or media. “[B]oundaries, surfaces, or perceptible difference present a place for things to happen, for events to locate” (2012:76). It is along boundaries where substances are transformed, accumulated, or exchanged. At times boundaries separate organisms, materials, or media that are incompatible with one another to some extent, leading to tension or conflict, known as a “stress condition”. At the same time, these situations may also provide niche habitats and opportunities for other media to mediate and mitigate conflict. “Thus, boundaries present an opportunity for us to place a translatory element in a design, or to deform the surface for specific flow or translation to occur” (2012:76). In particular, the edge effect suggests design strategies that:

“increase interface between particular habitats to a maximum. A landscape with a complex edge mosaic is interesting and beautiful; it can be considered the basis of the art of productive landscape design. And most certainly, increased edge makes for a more stimulating landscape. As designers we can also create harmonic edge[s] with plants, water, or buildings” (2012:77).

With respect to human habitats and edges, Mollison writes that “[o]ur dwellings and activities benefit from placement at edges, so that designing differences into a system is a resource-building strategy, whereas smoothing out differences or landscapes [is] a deprivation of potential resources” (2012:79). As a consequence, Mollison advocates for “edge cropping” and “productive crop mosaics” that invite productive and self-reinforcing boundary conditions between a diversity of species (polycultures). Intentional design can further promote the overwhelming interdependence found in nature. This leads to his “golden rule” of permaculture design: “keep it small, and keep it varied” (2012:81), a teaching that is in stark contrast to the conventional monoculture that is widespread within today’s commercial agriculture. 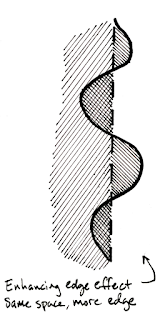 More broadly, Mollison advocates for designs that reflect or imitate natural patterns. For instance, he notes the benefits of drawing jurisdictional lines along natural boundaries such as water catchment areas (known as a “bioregional” approach), since it is likely easier for a group of people to maintain the health of an entire catchment area.

Mollison also urges us to consider the full range of implications that ensue from decisions regarding patterning design. For instance, he states that “[a]s designers we need to study and apply branching patterns to roads or trails, and to be aware of the stable orders of such things as human settlements, or we may be in conflict both with orderly flow (can we increase the size of a highway and not alter all roads?), with settlement size . . . , and even with the numbers of people admitted to functional hierarchies where information is passed in both directions” (2012:93). He notes that “[a] bird’s-eye view of centralised and disempowered societies will reveal a strictly rectilinear network of streets, farms, and property boundaries. It is as though we have patterned the earth to suit our survey instruments rather than to serve human or environmental needs” (2012:95). 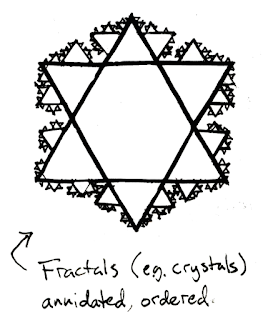 Mollison’s teachings regarding patterning are broad and deep, but from a planning perspective I would sum up his general philosophy and principles with respect to patterns as follows:

Principles Regarding Pattern in Design

The above lists are my own interpretations of Mollison’s principles, but I believe they reflect his thinking.

The examples that Mollison provides regarding permaculture patterning are generally confined to smaller scale and site-specific examples. So how can we imagine the implementation of these principles on a scale more appropriate to planning (read: city or regional scale)? While I’m not aware of any large-scale landscapes that are attributed as consciously constructed permaculture landscapes, I imagine that permaculture experts would point to the many landscapes that reflect traditional societies’ agricultural practices, since Mollison and others often point to traditional societies as the model for harmonious agricultural practices. Perhaps such landscapes resemble the narrow small-holder farmlands of Quebec, Canada, an example to which Mollison refers. Or maybe they reflect the contours of the ridge-line villages of Bali, Indonesia. Hopefully sometime in the (near) future I can share some examples. In any event, I think these principles can transcend scales, just as in nature. The results will be both as unique as the natural patterns intertwined within the landscape, and as universal as the recurring shapes and movements that Mollison reflects upon.

Mollison includes in his review of patterns with some inspiring and, I think, poetic language: “We are the universe attempting to define its processes. A Kalahari bushman would say we are the dreams of a dreamer” (2012:95). I find this a beautiful summation of human engagement in understanding Nature and our role within it, and the ultimate pronouncement of our embedded existence within the Cosmos. Finding a means of applying this philosophy to planning seems, to me, a worthwhile endeavor.

All drawings based on or inspired by Mollison (2012).
Posted by clalexander at 10:33 AM No comments: