Yesterday I had the honor of presenting a talk about the Philippi Horticultural Area and Cape Town’s water future at the University of Cape Town School of Architecture, Planning and Geomatics (“APG”). UCT’s APG is hosting a series on the water crisis here in Cape Town, and invited the PHA Food and Farming Campaign to come speak. After an initial presentation by PHA FFC’s chairman, Nazeer Sonday, my colleague Megan Parker and I presented the work we have been doing to better plan, design, and manage the PHA. Megan and I are part of PHA Food and Farming Campaign’s planning subcommittee, a group consisting of other recent APG graduates. Two other members in particular, Jens Horber and Louise Brukman, helped out tremendously in putting together the presentation.

I’m pretty proud of the work we have done so far, and am hoping we can take it forward and really start persuading the City to do a better job of managing the PHA. It is so vital to our water and food future, as well as to preserving the Western Cape’s unique and diverse ecology. Let’s make it happen! 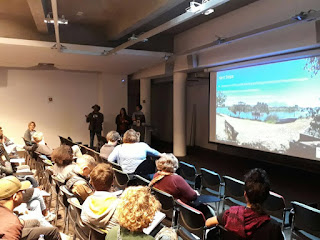 Posted by clalexander at 8:59 AM No comments:

The past weeks have been busy with a number of projects, most prominently with work for the PHA Food and Farming Campaign (“PHA FFC”). PHA FFC is a local grassroots organisation that advocates for the protection of agricultural and natural lands in the Philippi Horticultural Area (“PHA”). The PHA is a large tract of mostly agricultural land set within Cape Town’s metropolitan area. Originally part of a much larger area of dune formations that made up the Cape Flats, this area was mined and farmed, so that the landscape is very changed from what it was 150 years ago. Today it largely consists of farmland, mostly farmed by large scale farms but also by a number of small scale farmers. There are also some remnants of the dunes and natural vegetation on parts of it. 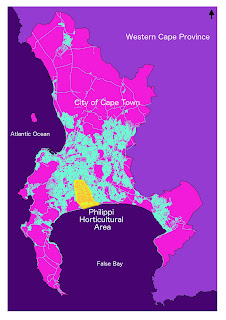 The PHA is a major contributor to the City’s fresh produce. It is also a critical aquifer recharge area. This second attribute has become particularly important given the region’s ongoing drought crisis (although the immediate impending crisis has dissipated a little) and the City’s plans to tap into the aquifers. Housing, sand mining, illegal dumping, and other urban uses also threaten the PHA’s use for agriculture. Contrary to many studies and plans, including their own, the City has approved new housing and sand mining developments in the PHA, which would affect nearly a third of the 3000 hectares of farming land and natural vegetation.

The PHA FFC defends use of the land for farming, but also promotes equitable land redistribution, bringing in black farmers, increasing the number of farmers and farm workers, and better integrating the PHA with the rest of the city. PHA FFC has a strong commitment to sustainable practices, and promotes smallholder farming, permaculture and reduction or elimination of chemical fertilizers. It accepts calls for municipal aquifer extraction (many farmers already do this through private wells), but only sustainably and hand-in-hand with aquifer recharge. Endangering the aquifer could endanger the agricultural, economic, and environmental sustainability of the PHA.

I first attended a site visit organized by one of my UCT professors, Tania Katzschner, and hosted by PHA FFC a few months ago. There I listened to PHA FFC’s chairman, Nazeer Sonday, and its Treasurer, Susanna Coleman. They both spoke eloquently and forcefully for their cause. I was so taken by their presentation that in November I sought them out to volunteer. I’m now part of PHA FFC’s planning committee, where myself and a few former UCT classmates are working on articulating a spatial design and management plan for the PHA that can contest the development plans of developers and lay the groundwork for better and more engaged management by the City.

Last week members of PHA FFC attended a site visit to Atlantis in northern Cape Town to learn more about that community’s innovative managed aquifer recharge system. All of Atlantis’s water is sourced from aquifers that are recharged with treated and filtered water used by the community itself. This system has been functioning for 40 years, and could serve as a template for a larger managed aquifer recharge program for the rest of the City.

I’m really excited about the prospects of closing the loop on Cape Town’s water cycle. While I’m very concerned about the threat of drying up or polluting our aquifer system, I also think that managed aquifer recharge can be done in a sustainable manner, and that doing so is more environmental than the open linear water system we currently have. Piping in water from hundreds of kilometres away, and then flushing it out into the ocean is not sustainable. Managed aquifer recharge may be the solution, if done right.

Excited to share more about my PHA FFC work soon!

Posted by clalexander at 3:13 AM No comments: