What level of condescension is implied in calling something a myth? In his arguments before the Western Cape’s High Court on 15 October, the City of Cape Town’s advocate Ron Paschke laid out a series of what he called myths that he argued underly the case against a proposal to develop 472 hectares of land located in the southern portion of Cape Town’s Philippi Horticultural Area (PHA).

The dispute at issue is between a developer proposing to turn the site into a 15,000-home mixed use community called Oakland City, and the PHA Food and Farming Campaign (PHA Campaign), a grassroots farmers’ organisation that is contesting the proposal. The City of Cape Town and the Western Cape Province are also parties to the case, having sided with the developer in opposition to the PHA Campaign in court. The City and Province both deny that they inappropriately approved aspects of the Oakland City proposal.

All of advocate Paschke’s asserted “myths” are rebuttable, but the following ones in particular (slightly rearranged) reveal fundamental misconceptions regarding the essence of the PHA Campaign’s arguments.

“The Oakland City site is part of the PHA”

Incredibly, the City argued in court that the Oakland City site is not actually part of the PHA, despite a long history of documentation, and even the City’s current proposed heritage zone designation, that indicate otherwise. The Province’s own study describes how since the 1960s the PHA, including the Oakland City site, has been designated as horticultural land.

It was not until the past few years that the City and Province took a number of actions to chip away at the PHA’s boundaries. In particular, the City hangs its hat primarily on a change to its Metropolitan Spatial Development Framework in 2012, presaged by a similar 2011 Provincial decision, that shifted the “urban edge” of the city to include the Oakland City site, thereby severing it from the PHA territory. These actions, the PHA Campaign contends, were unlawful and contrary to national law and policy.

The City’s reliance on the 2011/2012 urban edge shift to support the Oakland City site’s deletion from the PHA is akin to renaming District Six. The City cannot so easily erase the site’s historical and physical, not to mention legal, connection to the PHA. The Oakland City site is by no extent of the imagination urban; rather its use and features follow the trajectory, now disrupted, of the rest of the PHA.

The City and Province argued that none of the Oakland City site has been farmed, verbally footnoting that there has previously been “illegal” farming on a small portion of the land. One reason the land isn’t being farmed right now is that the owner—the developer—will not permit it. This is in contrast to farmed areas on adjacent land also held by developers.

What the City and Province also did not note was that a significant portion of the Oakland City site has been sand dune mined and then neglected, rather than rehabilitated to productive farmland as required under the law. Historically, PHA farmland has been established according to a process of sand dune mining followed by rehabilitation for farming purposes. This process has slowly progressed in patchwork form over the decades. It is therefore unsurprising that portions of the PHA have not yet been farmed.

The City made much in its arguments before the court that the Oakland City site is not currently producing food or jobs, and that it is not suitable for farming. The Oakland City site shares the same general physical, hydrological, and climatic features as the rest of the PHA, including what the Province’s own study states is the best suited land for agriculture within 120 kilometres of the city. Portions of the PHA has been farmed for well over 100 years, long before the introduction of modern fertilizers and water systems that the City argues is necessary for its cultivation. Governmental and non-governmental studies alike demonstrate the importance that the PHA plays in food production for the city, as a producer for particularly food-insecure populations and as regulator of broader market prices for the city.

“Farming is beneficial for the aquifer”

The City argued that farming the Oakland City site would pollute the aquifer with fertilizer and chemical runoff. The City never actually conducted an assessment regarding farming as an alternative to the proposed development. Instead, the government relied on the Oakland City site’s reinvention as an “urban” area to avoid considering farming uses, thanks to the previously mentioned urban edge shift in 2011/2012. This means neither the City nor the Province has properly weighed the costs and benefits of urban development versus farming.

There is evidence that the aquifer is impacted by ecologically damaging farming practices. This is not a reason to stop farming, but instead to shift our farming practices to more sustainable means. Claims that small-scale commercial organic farming cannot work sound very similar to the arguments against the shift to carbon neutrality. To say that we must take action to avoid imperiling the environment and our future is not to say it will be easy, but that does not mean it cannot or should not be done. Moreover, such a shift in farming practices is possible. For example, in Munich, city officials have engaged in a decades-long project to protect their aquifer and source of water through sustainable farming practices above its recharge zone.

“Development is undesirable and will endanger the aquifer”

The City’s advocate made much of the benefit that the development proposal’s 15,000 homes would bring to the city. But are these homes for the poor? Will they house the thousands of people living in informal settlements within and around the PHA? Are they located near existing infrastructure? Will they be efficiently located and address Cape Town’s spatial fragmentation and traffic congestion?

The answer is no. The City’s own analysis concludes that the PHA’s high water table effectively makes subsidized housing on the site cost-prohibitive, and developers are under no obligation to provide any. The development will require completely new infrastructure, including roads, water and sewage pipes, and electrical lines. In a city with 10,000 other well located housing opportunities, and with a damning legacy in spatial segregation, poor service delivery, traffic congestion, and strained public coffers, putting houses in the middle of designated farmland seems like a particularly unsuitable option.

In truth, this development proposal follows a line of poorly planned developments offered under the guise of solving the City’s housing problems, but which in fact perpetuate the social and spatial dislocation of the city. In this manner the Oakland City project mirror’s the ill-fated Wescape project, which proposed thousands of homes in Cape Town’s hinterland within a nuclear fallout area. The PHA, including the Oakland City site, is similarly unsuitable for largescale urban development. One need only to read Crispian Olver’s new book on corruption in Cape Town to get a sense of the fishiness of the Oakland City project proposal.

“The High Court can decide to protect the PHA”

Finally, the City’s counsel also argued that the judge sitting hearing the case is not empowered to question the City’s policy decision with respect to the designation of the Oakland City site as “urban”. This runs in direct contrast to the position the City takes in its most recent amendment to the Municipal Spatial Development Framework, in which essentially defers to the court, stating that if the court rules in the PHA Campaign’s favor, the site should be considered again to be part of the PHA. More broadly, the City and the Province have committed in writing to protecting and investing in the PHA. Their arguments in court suggest otherwise.

Critics of the PHA Campaign complain that it doesn’t represent all farming interests in the PHA. They are correct on that point. The PHA Campaign isn’t interested in repeating mistakes of the past, either with respect to the city’s urban development or harmful farming practices. What the PHA Campaign does embody is a vision for the PHA as supporting Cape Town at the vanguard of sustainable, food-secure, socially just cities.

The City’s asserted myths about the PHA do not hold up against the weight of evidence. More than that, they themselves distort and obscure the harm the City’s actions continue to perpetuate against the interests of its people. Who is really peddling in myths?

A shorter version of this piece appeared in the Cape Argus on 17 November, 2019. The full version was subsequently published by BizCommunity on 19 November, 2019.

Posted by clalexander at 10:18 AM No comments:

Reflections on PHA's Day at the Cape Town High Court

It’s been a little over two weeks since the PHA Food and Farming Campaign had its day in court against the developer seeking to develop 472 hectares of the Philippi Horticultural Area. The Cape Town High Court heard both sides in a saga that has been going on for about a decade. In court on the side of the developer were the City of Cape Town and the Western Cape Provincial government, who were denying that they inappropriately approved land use decisions regarding the proposed development.

I sat in for both days of the trial. As a PHA Campaign supporter, at times it felt like watching your favorite football team playing, wanting your sheer will to push them to victory. It was hard sitting through the government’s statements. The City in particular made much about the so-called “myths” underlying the PHA Campaign’s case, which of course I found very biased in favor of the City’s position. Fortunately, they allow phones in the courtroom here, and social media provided an outlet during the hearing. (I’ll hopefully be able to share a rebuttal of the City’s arguments soon.)

The PHA Campaign had a healthy presence outside of the court, making clear that there is broad support for its cause. While the PHA Campaign itself organized a strong showing, a number of people answered the general call to the public to show up, which was really heartening to see. There were some creative outlets for protest. 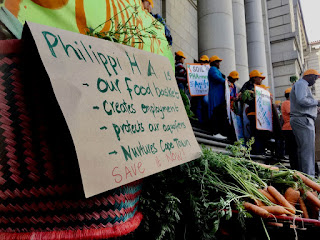 Shortly after the case ended, some commercial farmers from the PHA published a piece clarifying that the PHA Campaign does not represent them. Unsurprisingly, opinions regarding the PHA, even within PHA residents and farmers themselves, is fractious. Nazeer Sonday, the small-scale farmer behind the PHA Campaign, does not ascribe to the mono-crop farming systems used by current commercial farmers, and for that he is often derided as insignificant or not taken seriously. Discounting small-scale farming is a common theme in Big Ag, as is eloquently put by two PHA activists in this recent piece from the Argus. I don’t hold it against these other farmers to clarify their position, and I understand their own hardship farming within the PHA, which, like much of the rest of Cape Town, faces significant security risks. These are compounded in the PHA, which is rural and therefore less monitored, by neglect by the state charged with protecting its people.

I do believe that there is an opportunity to not just save the PHA, but to cultivate it into an example for sustainable peri-urban agriculture. In doing so, I think there is room for everyone to benefit. Hopefully the Cape Town High Court will take the first step by throwing out a speculative attempt to chip away at the PHA.

Posted by clalexander at 12:56 PM No comments: