The climate crisis and corruption are making the case for switching South Africa to a distributed network powered by renewable energy. This is the second of a three-part series that shows how. 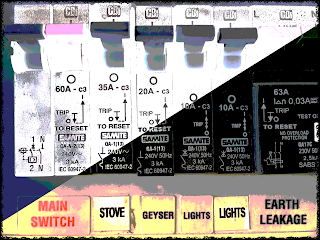 Climate change and corruption, two ephemeral forces lurking in the background, each composed of many discrete but interconnected events linking together to create seemingly unvanquishable scourges. Neither are unique to South Africa, yet the country appears particularly vulnerable to both. And so it was last month when intense rains tripped South Africa’s national electrical circuit, unleashing new electrical outages that hit historic highs, bringing new lows for a parastatal electrical utility already marred in scandals.

The overload of problems affecting South Africa’s electricity grid are many and varied, and include high rates of unplanned breakdowns at generation stations, massive corporate debt, increasing demand, aging infrastructure, delays in bringing on new power stations, and even potentially intentional sabotage. But despite all of the variety, the imprints of corruption and climate change in particular mark their destabilizing influence in the grid, whose own structure reveals itself to be particularly vulnerable to their impact. In other words, it is not just that the climate and corruption are clearly undermining the grid; it is also that the grid’s configuration is particularly sensitive to their impact. Last month’s outages capture a frame of this larger story.

A Grid Built on Coal, for Coal

The breaking point causing electrical outages last December came with heavy rains and extreme flooding in the eastern part of the country, causing damage to infrastructure and rendering coal supplies unusably damp at some of Eskom’s coal-fired power stations. Eskom’s and the country’s problems with coal go much deeper than dampness, however. It is not news that South Africa is and will continue to become more prone to extreme weather events. The Intergovernmental Panel on Climate Change, the world’s foremost group of scientists studying the issue, has predicted an increasing likelihood of extreme weather events in South Africa, including extreme flooding in the wetter southeastern areas of the country even as the southwestern areas experiences dryer conditions.

South Africa’s own government has acknowledged what the science says about the climate crisis, and has even moved to address the issue in national and local policies. But a variety of factors challenge progress, including countervailing economic pressures and an entrenched domestic fossil fuel industry. Elsewhere, research indicates that increasing extreme weather events and other climate change factors will impact electricity grids in a way underestimated by utility officials themselves.

While on the one hand South Africa’s grid will need to deal with the burden of a changing climate, on the other hand its supply mix is exacerbating the very problem it faces, not to mention more immediate air pollution issues that affect human health. Eskom is responsible for supplying 95 percent of the country’s power, and 90 percent of its supply is generated through coal-fired power plants. Overall, coal provides more than 77 percent of South Africa’s energy needs, contributing to the country’s outsized carbon footprint.

In contrast, renewable energy accounts for a tiny fraction of Eskom’s energy mix. According to Eskom, only a tiny sliver of its own generation is derived from wind or solar, with independent power producers providing most of the still small total amount utilized. Moreover, Eskom has spent years and hundreds of billions of rands (tens of billions of dollars) building new coal power plants, which are now long delayed and far over budget. This in a country blessed with significant wind and solar resources. 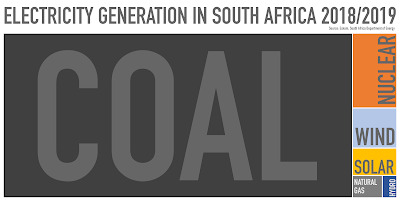 The result is a country overdependent on Eskom for power and on coal for energy, at a time when most of the rest of the world is seeking to ratchet down carbon emissions in the face of the climate crisis. Yet the system built on coal is also built for coal, with highly centralized and asymmetrical generation and distribution networks reliant on massive coal mines and mammoth coal-fired power plants. It is unsurprising then that this model’s best approach to satisfying the country’s energy needs is through more extractive mining and coal-leaning industrial-sized generation. The unfortunate consequence, as last month suggests, is a lack of resilience in the system and higher susceptibility to large-scale blackouts when a small number of generation sources are disrupted.

Were it that South Africa’s over-reliance on coal was its only issue. Eskom’s track record of poor execution and delivery of projects is no secret, but the troubles appear to go beyond mere maladministration. Early last year, South African media exposed the findings of an unpublished report by South Africa’s anti-corruption Special Investigating Unit concluding that in 2008 Eskom officials intentionally ignored coal supply issues to induce a “self-created emergency” leading to South Africa’s first experience with load shedding. Having precipitated a crisis, Eskom officials apparently bypassed normal procurement processes to enter into shady energy contracts with third party coal providers at massively inflated rates.Another 2015 report by the international law firm Dentons indicated that similar contracting irregularities may have been implicated in further load shedding events in 2014. South African media have also highlighted how politically connected businessmen have profited from contracts whose terms are unfavorable to Eskom. In some cases, these parties have either delivered poor quality products or services, or have not delivered at all. Eskom’s history with other large infrastructure projects is similarly suspect. For instance, its aborted deal regarding new nuclear generation has likewise faced its own corruption scandals.

Meanwhile, Eskom faces staggering debt and a financial model that has struggled to keep up with mounting maintenance and repair issues, another factor in the December crisis and other load shedding events. The financial viability of utilities such as Eskom is based on increasing profit margins from the sale of power to customers while lowering marginal production costs through largescale centralized generation. In other words, Eskom’s strategy is to make more and sell more (coal-fired) power in order to make up for financial shortfalls, or else seek direct help from the government and, ultimately, tax-payers.

Certainly, problems regarding corruption and financial solvency do not stem solely from the highly centralized and vertical nature of South Africa’s grid. It is easy to see, however, how such a structure and Eskom’s “too big to fail” role in the electricity market would create opportunities for graft and mismanagement. Monopolies over technical and managerial expertise and information, as well as over centralized public services themselves, can help facilitate opportunities to illegally leverage that power, while highly bureaucratic systems detached from the communities they serve are prone to abuse because of a lack of accountability. Eksom’s role in maintaining the grid, and its operational and financial structure, create the very choke points and monopolies that can be easily used in the service of corruption.

In a country and world increasingly susceptible to extreme weather events, the already thin margin of error in managing a national electrical grid becomes threadlike. Scientists warn us to expect climate change to magnify problems caused by Eskom’s history of mismanagement and over-reliance on a centralized system built on coal, a prime contributor to the atmosphere’s CO2 levels. Yet South Africa’s grid is tethered to coal and a highly centralized structure that go hand-in-hand, leaving it exposed to the corrosive effects of climate change and corruption. The question is, are South African’s willing to accept more of the same?

Up next: Part 3, Embedded Futures.

Posted by clalexander at 2:55 AM